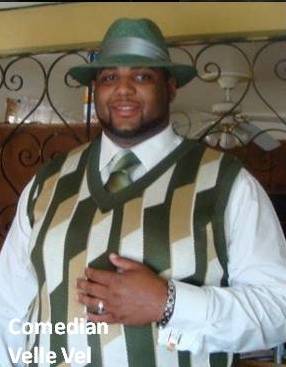 “Velle Vel” is Chicago’s Newest and Hottest Clean Comedian.  Travele Judon aka “Velle Vel” (pronounced Velley Vel) is a native of the South Side of Chicago where he attended Morgan Park High school. Velle Vel was the drum major of the Mustang Marching band.  Velle Vel continued his education at Jackson State University in Jackson, MS where he marched with “The Sonic Boom of the South”. His love for music led Velle Vel to start his very own “Windy City Marching Band” back in his hometown of Chicago. Velle Vel has been billed with such greats as: Gospel Artist “Tye Tribbett” and Gospel Stellar Awards Winner “Vickie Winans”, as well as the “Thou Shall Laugh Gospel Comedy Tour Comedians & Comediennes.